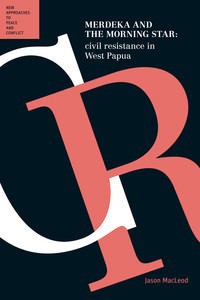 Merdeka and the Morning Star: Civil Resistance in West Papua

Jason Macleod is a member of the Change Agency team: a dedicated activist educator, mentor and strategist.

Having dropped out of university in 1991, Jason hitched to northern Queensland then made his way to Papua New Guinea.  Hiking and paddling the Sepik, he made his way into a remote part of West Papua where he contracted malaria. He collapsed into a coma and was cared for by local health workers. Jason’s initial experiences in West Papua led him to form an enduring commitment to justice for the West Papuan people: a 25 year commitment that has involved spending time with leaders of the self-determination movement each year, training hundreds of West Papuan activists and completing a PhD to deepen and articulate his emerging understandings.

Jason’s analysis of the West Papuan struggle for self-determination is powerful and compelling. He draws on his 25 years of lived experience as an ally and his deep understanding of social movement theory.  Merdeka and the Morning Star speaks equally to academics and activists. Jason applies his deep understanding of theoretical frameworks and political history to analyse strategic options, looking at the West Papuan self-determination struggle in its historical and contemporary forms, and looking forward to its future success.

This is a precious example of activist research. Jason writes with the clarity that comes from decades of action and reflection and the commitment of a genuine ally.