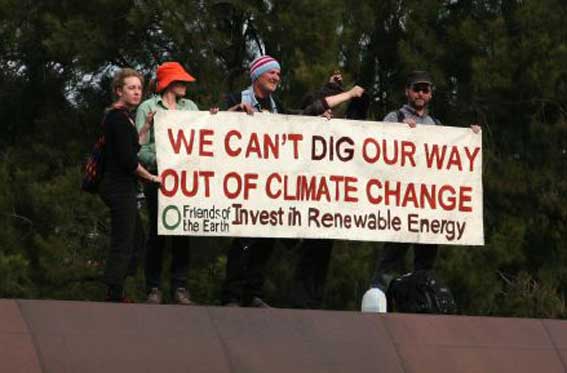 We are all leaders: Learning from the Climate Camp (Anth Kelly)

In July 2008, several hundred climate change activists gathered in Newcastle for Australia’s first climate camp. Anth and James supported the camp’s training program and facilitation team. Anthony Kelly’s draft article focuses on the decision-making processes during the week-long camp and the action during which 1000 people stopped coal trains: particularly the spokescouncils and action teams. We welcome feedback and comments.
………………………

“We need to develop a different understanding of power – where people work with each other rather than seeking to control and command. And we need to find ways of relating to each other without hierarchy and leaders.”
– Doing it without Leaders – Seeds of Change (*1)

Australia’s first national Climate Camp, held in sight of the massive coal ports of Newcastle in July this year was without doubt one the best of the many nationally organised action camps held in Australia in the past few decades. This and other Climate Camps in the UK, Europe and the United States over the past few years have developed new and unique organising models and tactical innovations that are worth examining here.

Organised by a nationally dispersed network of organisers from a spectrum of climate action groups and organisations led by Rising Tide in Newcastle, the Australia’s Climate Camp attracted over 500 people and served as the catalyst for the largest direct actions against the coal industry yet seen in this country. The camp structure and logistics worked well and functioned for the six days. There was always great food available, there was always paper in the loos, and seven or eight marquees were often full of people in workshops, plenaries and meetings in the four days leading up to the mass actions. The stretched but still functioning organising team, made up of many local activists as well as interstate organisers, had spent months developing plans for the Sunday mass action well before the camp, which meant that activists arriving in Newcastle could focus on building our resources, planning and coordinating the action teams to make the mass action as effective as possible.

The media reported one thousand of us on the Sunday 13th July, it seemed a lot less, but together we stopped a significant section of the world’s largest coal port from operating. Despite 160-odd NSW police, water canon, horses and dogs along the coal train tracks, Action teams were able to work together, disperse when needed, act with their own autonomy within the larger action structure and successfully occupy and lock-on to the coal train at multiple points.

The action on the Sunday took place over perhaps two kilometres of train line. Most arrestable teams could not be seen by others. Each had their own support and goals, but each team was able to fulfil its part in the overall action plan, and each incursion, occupation, banner drop, lock-on, and arrest was celebrated as a collective victory, a dynamic rarely seen in other dispersed affinity group actions. The NSW Police were brutal as usual, overreacting to incursions past their cordon. Pain compliance holds, grabs, punches and assaults occurred in many of the 50 or so arrests, but many more were calmed down and de-roled by experienced activists, used to nervous and over-hyped cops.

Horses were used to contain the initial march along the railway track to the Carrington coal terminal and later to try and clear the street. However, specialised Action teams, (zombies and clowns) were tasked to slow them down so they couldn’t compress the march or push us forward too fast. Spreading out the march meant spreading out the police line and thereby maximising the opportunities for arrestable teams to get past the police and onto the train. These action teams withstood hours of slowly moving in front of police horses, with the horses literally breathing down their necks, resisting the constant threats and orders from the riders, so that others could find places between the cordons to slip through.

Each report back from the Action teams that night was met with a round of thunderous applause at the Spokescouncil. The following day, Monday, again saw several lock-ons on coal loaders, rallies through Newcastle and banner drops, each again celebrated as a shared victory. Most of the arrestees received a $400 traffic penalty for their efforts with a few copping malicious damage. Arrestees were proud as punch and as pleased as possible with the outcome. Action teams were already fundraising and the camp deliberating about legal support strategies later that night. It soon became very evident how important the action team structure was in supporting the individual arrestees. Very few, if any, of the people arrested would not have had a pretty tight crew of friends and comrades around them.

The day’s disruption of that particular coal shipment was reported as the equivalent of taking every car off Australia’s roads for a day. Bloomberg reported that coal exports from Newcastle fell by 18% in the week of the camp (*2). The 7.30 Report on ABC stated that the battle lines in Australia’s climate change debate had been re-drawn, as they showed footage of Climate Camp activists being removed from the train. One of the strategic goals of the camp was to build and empower the direct action components of the still emergent climate movement in Australia. By all accounts heard at camp and since it achieved that. Locals and coal communities in the Hunter region expressed overwhelming support for the camp and the actions, designs and plans for many more are already being discussed, national direct action e-lists being set up and hundreds of people left with a renewed vigour to organise actions against coal infrastructure or related targets.