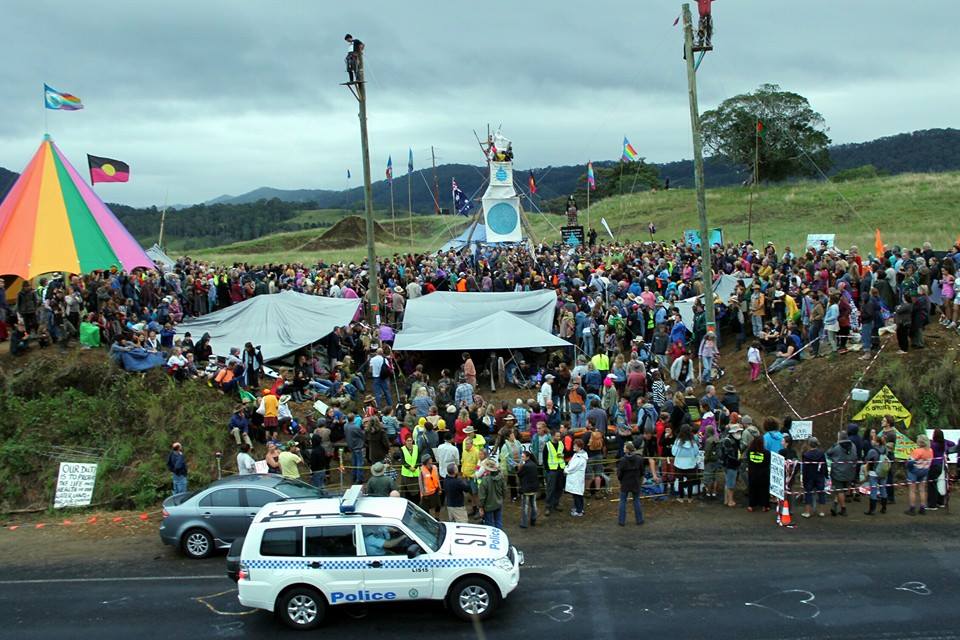 Understanding the success at Bentley

Based on an interview with Lock the Gate National Chair, Simon Clough
by Ken McLeod, 14 June 2014

Social movements promote participatory democracy. They are a grassroots response when the existing democratic system fails to respond to a major issue. Social movements understand that ultimately the power in the community lies with the people themselves and that the powerholders and politicians will eventually have to change or be swept aside by the power of the social movement.

1. A commitment to a whole-of-community approach – deliberately setting out to bridge deep political and social divisions within the community

From the very beginning of this social movement the aim has been to be inclusive of all aspects of our community. The Northern Rivers Gasfield Free Communities project which has been foundational has included prominent members of the National Party, Greens and the ALP. It has also crossed the social divides of this community. The Terania Creek rainforest protest of 1979 was the first successful protection of rainforest in the world, but in many ways it was deeply divisive in the wider community. Thirty-five years later we knew we needed to build a grassroots campaign that was inclusive.

Easy to say, yet the practice of going door-to-door and building literally household by household a movement across the Northern Rivers took a lot of resources and commitment but it resulted in the strength to stop unconventional gas development at least at this stage at Bentley. Once the momentum of a process like this builds and people start to realise the power of connecting with their neighbours, their street, their village/neighbourhood, and their whole community, it becomes self-perpetuating.

The key to creating this spirit of collaboration was valuing and working with areas of agreement and disregarding those areas where there was disagreement. This seemed profoundly different to many previous social movements where there is often pressure to sign up to a complete ideological agenda. Partly this was possible because of the ‘framing’ of the issues as values to protect the land, water, air and ultimately future meant that there were clear core values. Values tend to unite while outcomes tend to divide.

2. A clear common purpose – providing a single values focus across the whole community

One of the things that is fascinating about a social movement is, that because such an large amount of energy is generated with a particular focus – to stop the drilling in this case – lots of people are attracted to it, many of whom bring their own causes. Many of these people feel they can harness part of the social movement energy to advance their own cause. So they try to get other people involved to collaborate with them. The impact of these actions can feel like there are many agendas running at once and these “parallel causes” can derail the movement.

It takes significant clarity and steadfastness to see that yes, these other causes are all valid, but that’s not the purpose of this action. The campaign must be clearly focused on a common purpose which, at Bentley, was stopping Metgasco getting its drilling rig onto the property. Very difficult to achieve in practice in the field where you’re working 20 hours a day, with multiple issues going on, and there’s all sorts of agendas running. In these circumstances keeping that overall clarity of purpose is a challenge. At Bentley there were sufficient people with the skills and commitment to be able to hold the common purpose in a very difficult and confusing situation.

3. A commitment to non-violent direct action – involving both a wide understanding of the principles and values of non-violence and the building of practical non-violent skills

The non-violent action training group was involved in the training of at least 1,000 people for Bentley. The impact of this was hard to assess in some senses because the impact is not apparent at the time, but it does permeate the whole movement. People do have to be reminded in a camp like at Bentley and on the blockade that that’s what the group is standing for, but in the end it becomes part of the DNA of the whole operation and people respond really well to each other with a degree of respect.

When people practice non-violence and begin to feel compassion for all the people involved, it doesn’t mean they become weak or start to give in. It means they have more understanding, for instance, of the lot of the farmer who is willing to consider allowing his land to be drilled because he believes he needs the extra income, or compassion for the police who are sent to do a job that someone else determines and, of course, exercising compassion for each other on the blockade and in the camp. There were times when some people did the wrong thing and coordinators had to deal with it in a way that was compassionate and protected the wellbeing and aims of other people in the camp.

Compassion was also seen in the way protectors were able to see each other’s weaknesses and accept them and work with them, and not take that as an opportunity to take advantage or humiliate another person. In a l practical sense that was non-violence in action, expressed as respect and collaboration. If one can have compassion for someone with whom you don’t necessarily agree, one can respect them much more. That was another essential element of the whole blockade. Handling a very complex and intense situation such as a camp of hundreds of blockaders requires mutual respect.

Respect also extended to the land itself, respect for the beauty of the place, respect for the creeks and the water, and respect for the voiceless elements of the natural environment. Indeed, this was one of the fundamentally profound reasons why people were there. This permeated the whole camp and the blockade.

The commitment to non-violence was critical in dealing with the police. If we hadn’t been able to say, hand on heart, we are committed to non-violence and non-violent blockading, we would not have had that platform to negotiate from with the police and that would have been extremely difficult. If we had shown ourselves to be an uncontrolled rabble, it would have been a very different result. In that way the profound commitment to non-violence on the part of the majority of people at the blockade and in the camp gave us an enormous advantage and was a significant element in our being able to have the police treat us respectfully which was a large part of the Minister withdrawing Metgasco’s Bentley licence.

4. Distributed Leadership – a real commitment to empower people to take leadership whenever circumstances required it

From the beginning of the movement distributed leadership was the way of operating. It meant that people were attracted to those areas that they wanted to work in and people generally will do far, far more from their own impetus, than they would if they were told to do something.

This type of leadership also gave a high degree of resilience to the organisation as information and skills were readily shared to ensure redundancy to enable people to move in and out of leadership roles, adapting quickly.

Distributed leadership was a practical necessity at the camp/blockade. The operation was so big and the culture of the people involved was very coloured with anti-authoritarianism, there was no way the camp was going to have a ‘king’ or ‘queen’ or anything of that nature. Distributed leadership that allowed people to step forward and take on responsibility and which supported them in doing that was the most effective option.

There has to be leadership and followership, and that’s always a delicate balance. Individuals lead in some things and follow in others and sometimes it’s incredibly relaxing to follow. That requires a sense of respect for the other people involved. It’s a dance where a person follows in this particular situation because of trust and respect for the people who are leading and in another situation a person feels s/he has the capacity and the ability to lead so s/he takes responsibility and deals with whatever is arising as best s/he can. Ideally people will follow and support each other in doing that.

The beauty of distributed leadership is that it gives the opportunity for a whole lot of people to take up a role and responsibilities and get respect and kudos for stepping forward.

The camp/blockade benefited from the fact that many people were familiar with this form of leadership through their experience with organising other actions, intentional communities and developing and running festivals and community markets. Some of the protectors were in their second generation with a third generation of activist/protectors well on the way.

5. A Cultural Underpinning – expressed through creating specific opportunities to celebrate and enact the shared values of respect, compassion and solidarity

These celebrations are absolutely critical. One of the really important elements at Bentley was the contribution of the Aboriginal people who were there – the original custodians of this land. They were able to articulate in so many ways their deep connection with country, their deep understanding of the impact this drilling would have on country. They were an integral part of the ‘Greet the Dawn’ ceremonies or rituals that happened every day, and an integral part of the evening gatherings.

These rituals not only displayed the spiritual values, the connection, the respect, the role of the Original people, but also showed the pragmatic ability of this group of people to take care of themselves and each other in a way that was distributed and voluntary. It was extraordinary, particularly when you consider that the camp went on for four months and for two and a half of those months there were hundreds of people and on alerts at the blockade, thousands. These rituals were symbolic, they were great expressions of the shared values of the people on the blockade and in the camp. They were vitally important to creating solidarity for the campaign.

Of course another facet of the action’s cultural underpinning were events that were simply fun – making music, having visiting celebrities, high tea with the Bentleys, frocks on Friday, and any number of other activities that people just enjoyed. It can’t be expected that people will commit to these actions without a degree of fun and release. Fun is the antidote to the deadly serious activist model that has pervaded so many movements.

6. Courage – to go beyond comfortable roles and taken-for-granted assumptions and step into the unknown

So many people at Bentley displayed courage, the ability to step outside ones normal comfort zones. In its more extreme forms it was obvious in the people who scaled the high mono-poles and were prepared to lock on to them, trusting that the police would eventually be able to move them without endangering their lives. The people who placed themselves in ‘arrestable’ positions, prepared to endure hours and hours of danger and discomfort while the police removed them from their lock-on installations.

It was also evident in people who had never even thought to associate with a blockade, but felt that the Bentley issue was so important that they overcame their media induced fear of ‘extremists’ and ‘radical activists’ to come out to the blockade and participate. Needless to say these people quickly found the reality of the blockade was far from the media hype.