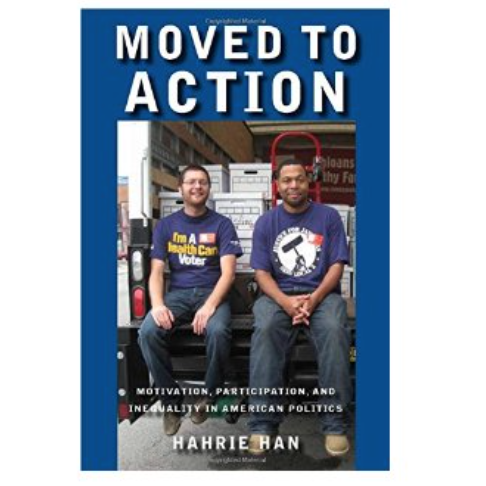 Han offers an answer. She draws upon quantitative research and her own interviews to explain why and how people take political action when it’s really hard for them. Han offers the “issue public hypothesis” to argue that personal connection to issues can motivate non-politicised people to take political action, before identifying three findings relevant to the mechanisms for involvement. Thus the lessons of Moved to Action provide both a framework and a toolkit for those seeking to empower and work with, or within, marginalised communities.

Han disputes this characterisation. Looking at examples of people who get involved without a pre-existing political interest, she uses Philip Converse’s term “issue publics” to describe a cluster of people who may not be politically savvy but “have particular personal concern for certain policy issues.” Although members of an issue public may not have vast resources to participate, they have motivation. “People act,” writes Han, “not only because they generally care about politics but also because they care about addressing problems in their own lives or living up to a personal sense of who they are.”

Let’s be honest – this idea probably isn’t going to stop the presses. But I think there is something noteworthy about this idea of “problems in their own lives” or “a personal sense of who they are.” Too often we talk about problems in broad terms that are too distant from people’s lives and may evoke no emotional response. Han’s research indicates that particularly when engaging with a less-educated audience, it is important to make an issue personally relevant and emotionally resonant.

And “personally relevant” doesn’t have to mean appeals to naked self-interest. Someone can be personally invested in an issue because of how they want to see themself – their values. Han quotes Joy Cushman, an Obama campaign organiser: “For everyday people to be involved, the issues needed to connect to [their] values.” This suggests a crucial role for agitation in mobilising and motivating less-politicised individuals – not only should the issue be made about the impact on their lives, it should also be put such that the audience’s self-identity nudges them towards activation.

The issue public hypothesis helps us to understand the circumstances in which less wealthy or educated individuals and communities might take political action. It also offers a framework for equalising political participation. While participatory resources are disproportionately concentrated with the existing power elite, motivational resources like personal commitments are more equally distributed. Such resources thus provide an avenue for motivating and mobilising dormant constituencies.

But motivation isn’t enough. What is it going to take to get someone taking that first crucial action? When does someone move from caring about childcare rebates to calling their politician?

Han emphasises three consistent “themes” for those who remained politically involved. Firstly, initial action required more than just a values connection – there needed to be a specific prompt. Secondly, someone who got involved due to a personal connection could then become further politicised and develop a political identity that commits them further. Thirdly, the initial experience had a big effect in determining whether people would remain involved.

Now, I hope it’s handy for me to read a book, go through all the boring bits (and there were some), and take out the most useful parts. But let’s face it – soon computer algorithms will be able to do this much faster than I can. So as an incredible value-add, I have taken Hahrie Han’s three lessons, re-ordered them, and condensed them into one beautiful mnemonic: invite, involve, inspire.

Broad values and concern are not enough for people to take action. Perhaps they load the gun, but someone, or something, has to pull the trigger.

Han’s research finds that this “triggering” could come from events, people, or experiences. Someone might actually act on their values for the first time because they were personally invited, or because someone they respect is involved. There might be an event specifically targeted to them – particularly if it involves activities that are familiar. Or it could be a personal experience, like experiencing racism on voting day, that makes the penny drop.

This has a few implications. There’s clearly a role here for deliberately providing a prompt to people – creating tailored events or opportunities and using personal conversations to trigger action from people who are already in alignment. For example, “Talanoa4Climate” aims to create natural spaces for Pasifika to come together and learn together about climate change, perhaps for the first time. But there’s also an opportunity to be somewhat reactive – to identify when dire circumstances might be causing people to rise up themselves and there is a role for an organiser to catalyse or support that mobilisation. For example, NUW has been working with Ni-Vanuatu seasonal workers to challenge exploitation. Whether the prompt is planned or unplanned, it has to come from somewhere.

Involve: don’t let one person bring all the snacks

Once someone takes their first step, their early experience will determine whether they remain involved. In particular, Han indicates “a sense of responsibility” as something that increases commitment and improves retention. If you give someone genuine responsibility, however, small, they feel more committed and invested.

One of Han’s interview subjects describes being at a meeting to plan a video screening and she was asked to “bring the pretzels”. At a later event she was asked “to bring the movie”. “And that was the day,” she says, “the whole thing became mine.” She concludes, “Don’t let one person bring all the snacks.”

Organisers in the AYCC talk about the “lemonade test”, as a way of improving someone’s commitment and also testing their accountability. Did they bring the lemonade? The ethics of sugar-sweetened beverages aside, this is a sweet (pun intended) example of how simple it can be to start giving people responsibility and giving them a measure of personal accountability in the success of every project.

Han’s research also establishes that a personal issue commitment can motivate participation which then leads to greater politicization, cementing the initial commitment.

This politicisation occurs because people have malleable identities. Someone who doesn’t see themselves as a union activist might start going to meetings because their manager expects them to endure sexual harassment as part of the job. Maybe they then put up their hand to bring in a copy of their staff roster. They might then start learning more about enterprise bargaining, the injustices experienced by other colleagues, and the broader challenges facing their sector. They over time come to see themselves as someone who does this sort of thing. Thus, “the process of participation itself helps activists construct identities for themselves, which they then are motivated to sustain through their future actions.”

This process doesn’t just happen though. Good organisers deliberately create spaces and establish experiences that will, basically, radicalise people, increase their political consciousness, change their political identity and lay the foundations for sustained involvement. The Maritime Union of Australia, for example, apparently teaches Marxist theory. Consciousness-raising sessions, retreats, late-night conversations, road trips, are all opportunities for activist identities to evolve and for commitments to deepen.

Too often I hear privileged, comfortable activists say that it’s unrealistic to expect marginalised communities to take political action. There’s an implicit sense that they’re too busy making ends meet, or that they’re too downtrodden, to be actively involved in addressing the injustices that affect their daily lives. This is clearly bullshit. But it’s still handy to have Hahrie Han’s Moved to Action call bullshit in a more empirical and tactful way.

Moved to Action challenges the conventional wisdom that resources are a necessary condition for political participation, using the idea of “issue publics” to explore how personal and values-based connections create an avenue for participation for people who don’t necessarily have many resources. Further, Han offers the method I refer to as “invite, involve, inspire”: use triggers to invite initial movement, involve with genuine responsibility, and inspire people to shape their identity and motivate lasting commitment.

Having a maleficent privileged elite in power in Australia is clearly not working out great. But the answer isn’t to have a well-intentioned privileged elite in power instead. Moved to Action highlights the possibility of motivating action from under-resourced communities. It offers ideas about how to do so. And most importantly, it highlights the moral and strategic necessity of making sure that those on the margins are given every opportunity to make their voices heard.