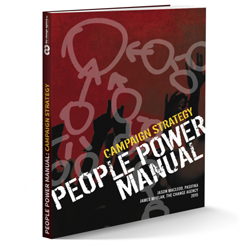 Campaign Strategy Guide: ‘How to’ guides for organisers and activist educators

The Campaign Strategy Guide was the first instalment of the People Power Manual, a resource created for activist educators and facilitators.

The Campaign Strategy Guide equips activist educators to facilitate a range of participatory exercises with activists, organisers and citizens. It can also be used as a do-it-yourself guide for campaigners. The guide incorporates 20 handouts, several workshop schedules and process guides for 27 strategising processes that have been tried and tested by thousands of campaigners.

The Campaign Strategy Guide was launched during the 2015 Organise conference in Sydney. Revised editions have been published in 2017 and 2020.

Purchase in hard copy or download in electronic format >